Larry Keith was honored in two events in the Houston area.

Larry Keith passed away early on the morning of 7/5/09. Below is an image of the obituary as it appeared in the Houston Chronicle. We, Larry’s children, have reposted some of the original content below which describes Larry’s role on this site. In addition to the background information below, in 2006 he relocated his base of operations from Houston to a small cabin near Grapeland, TX that he had owned and been building for as long as we can remember. He finally made it his permanent home.

A memorial gathering in Houston is planned for October. Please check back for more detailed information, which will be posted here. 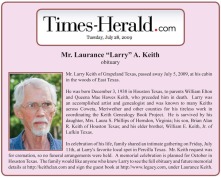 For three years (1992-94) I was editor of “Keith & Kin”, a publication for the membership of Clan Keith Society, USA. In that capacity, I gathered a fair, general knowledge of the history and legends associated with the KEITH name, and about the homeland of Scotland. Since mid-1993, I have been heavily involved in coordinating efforts of many KEITH researchers who participate in The Keith Genealogy Project, and served as Editor of the book, Collected Genealogies of Keith, Keath& Keeth Families in North America. I am 62, a life-long resident of Houston, and a freelance commercial illustrator. (Click below if you’d like to see my work.) Genealogy, golf, birding, planting and making stuff are my main interests. I travel frequently, and usually visit with other Keiths wherever I go….and I write about life.

Descending from the family of David Keith (born 1765) of Georgia, my clan migrated first to Arkansas, and arrived in Texas after the Civil War. My grandfather moved from the town of Keith (in Grimes County), Texas to Houston in 1921. Most of the men in this family worked for Hughes Tool Company at some point, and my father retired after 43 years (was general foreman) in 1965. I was married in the same year; divorced since 1976. My two grown children are pictured at right. Laura Shannon Keith Phillips now lives in Virginia with her husband. Brian Alan Keith has left the U.S. Marines active duty to join the Fire Department. He also currently serves in the USMC Reserves.

Are we cousins? If you’d like to see an outline of my ancestral KEITH family, click here.

PROFESSIONAL After graduating from Stephen F. Austin High School (1957), I studied at the Texas Academy of Art, and later went to the University of Texas. Thus, I have been involved in some area of the art business for 42 years. While in art school, I began doing commercial graphics. From 1962 to 1967, I worked for Houston’s 2nd largest studio, and resigned as vice president of that company in order to freelance. Since the late 1970’s I have done illustrations for numerous well-known companies, including Southwest Airlines, Motorola, Gaddi’s Pizza, American Bank, Compaq Computer and many others. Mostly I have worked with the airbrush, but have recently acquired the computer system capable of doing essentially the same stuff.